Technical structure of the Plank

All our planks are made from a single length of hardwood. 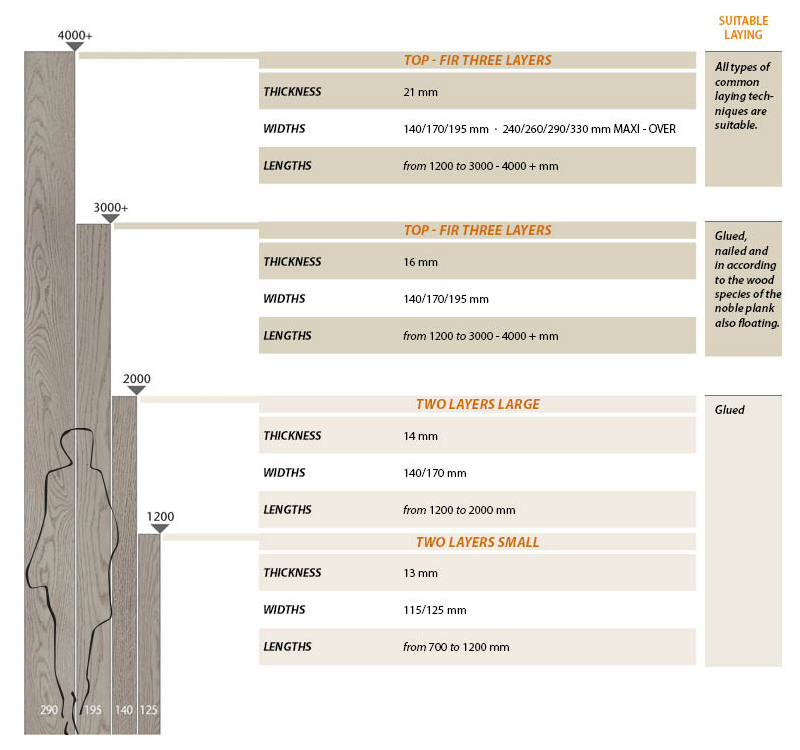 Internal cutting means that we can achieve “maxi” sizes: “standard” widths of up to 33 cm and lengths of up to 5 metres.

The Three-Layer Hardwood structure, created, designed and produced by Cadorin since the 80s, has been designed to give the maximum stability of the plank with any type of wood species used. The three crossed wood layers limit the natural movement of the wood whilst at the same time allowing the right elasticity of the plank, which is under environmental stress due to seasonal temperature changes, underfloor heating, very dry air, and so on.

The THREE-LAYER HARDWOOD plank is the replacement for the traditional SOLID plank or MONO LAYER in HARDWOOD. The solid wood in single layer (mono layer) mainly in large dimensions, can't limit the natural movements of the wood, in fact, over the course of time the planks can become somewhat misaligned, often with large cracks appearing between the boards or changes in the surface level.

So the Three-layer structure enables us to work wood planks and create large-dimension boards both in terms of width and length, ensuring maximum stability over time. The appropriate use of joints gives a good strength to the four sides and a perfect flatness.

The first layer, or TOP NOBLE LAYER, is made of a single solid wood layer of 4.5-5 mm, the clear thickness of which allows for various future finishes, for maintenance and/or restoration.

►Why are CADORIN planks thicker than others on the market?

The three-layer planks usually on sale range from 15 to 20 mm in thickness. Cadorin produces its planks in 16 to 21 mm thickness. The real difference, however, lies in the noble plank (the tread layer of noble wood on top), which instead of being 3,8-4.0 mm is as thick as 4.5-5.0 mm. It's as simple as that!

► Are ALL 3-LAYER PLANKS structured in the SAME way? what's the DIFFERENCE?

Most 3-layer planks consist of a top layer in noble wood 3-4 mm thick and lower layers in prefabricated materials such as plywood, rotary cut counterbalance layers or two-layer planks in light wood.

CADORIN THREE-LAYER PLANKS, on the other hand, are composed of THREE LAYERS OF SOLID WOOD: the top layer in noble wood is as thick as 4.5-5.0 mm. The middle layer is in CROSSED SOLD FIR, and the bottom layer is a 5.0 mm thick strip of wood such as OAK, AUSTRIAN LARCH or OTHER PRECIOUS WOOD! An excellent structure like this guarantees perfect performance with the natural movement of the wood throughout the life of your floor.

4,5/5 mm single plank of noble solid wood.
Floor surface: good resistance to wear, useful for future sanding or maintenance thanks to the excellent solidity of the wood.

Solid strips of cross-grained fir.
Stability and solidity in the structure.

4,5/5 mm solid plank in the same noble solid wood as the TOP layer or in larch (FIR).
Counterbalance to limit the natural movement of the wood. 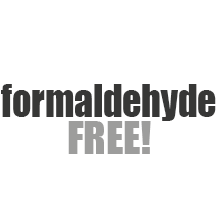 The wood layers are glued with adhesives free of harmful substances such as formaldehyde (laboratory tests with E1 -EN 717-1:2004 classification) as well as being tested for the emissions of volatile organic compounds VOC (UNI EN ISO 16000-9:2006 e ISO 16000-6:2011) for healthy air in our homes.

Tongue-and-groove joint and light chamfering on the four sides.

2 LAYERS - STRUCTURE and SOLIDITY of the TWO-LAYER PLANK

The two-layer structure is used for medium-sized planks. The production method is the same as for the three-layer plank (mentioned above) but the lower support layer is different; instead of being a crossed solid structure, it is made from a crossed high quality birch plywood and consequently the dimensions of the plank are also different (smaller than the three-layer plank).

If a three-layer plank is chosen for a living area (e.g. living room floor) and a two-layer plank for another area (e.g. night floor) the production guarantees the same surface aesthetics of the finishes, as the two batches are especially machined at the same time.

The wood layers are glued with adhesives free of harmful substances such as formaldehyde (laboratory tests with E1 -EN 717-1:2004 classification) as well as being tested for the emissions of volatile organic compounds VOC (UNI EN ISO 16000-9:2006 e ISO 16000-6:2011) for healthy air in our homes.

Tongue-and-groove joint and light chamfering on the four sides.

The additional workings applied to noble wood enable us to give the surface a different look. There are several processes used: brushing, hand planing, saw cutting, aged effect, etc. They are also combined with various finishes with oil and varnish to give an original look to the wooden floors.

CADORIN PLANKS meet the highest quality standards thanks to: